The construction of the fixed link to Great Bernera from Lewis was a major breakthrough for civil engineering in the UK - it was the first example of a bridge made of pre-stressed concrete girders in the country.

One of the largest crowds ever assembled in Lewis, in Stornoway or out of it, swarmed across the bridge behind the official party to explore a land hitherto unknown to most of them. 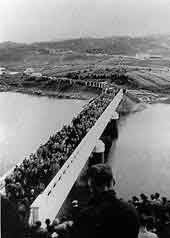 Major John Stirling, the convener of Ross and Cromarty County Council, then the local authority for Lewis, told an official dinner to mark the opening: 'The population of the Highlands is declining and the Bernera Bridge was built in the belief and the hope that it is going to lead to the maintenance of a young, happy and active population on the island for many years to come.'

The cost of the project was met from national and local government - with 60 per cent coming from the transport ministry, 25 per cent from the agriculture ministry and the rest from the council.

Pictures available from the museum on Great Bernera show the huge gap in technology between the labour intensive work of that era and the present day.

Before the bridge was built there had been a local campaign for a causeway to replace the boat which used to cross the strait with cattle swimming behind it. The money raised was later used for an improved road to Bosta.

A total of 25 local men worked on the construction of the bridge and its associated works, with stone, earth and spoil moved by wheelbarrows and by a temporary tramway. 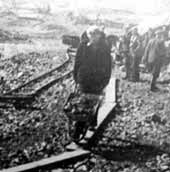