A bridge linking the islands of Harris and Scalpay which would improve economic development and social access was one of the key tasks identified by Comhairle nan Eilean Siar in the early 1990's.

With the welcome assistance of a 65% grant from the European Union through the Objective One Programme, the islands' authority was able to proceed with the ambitious transport objective they had set themselves to construct the 300m bridge to Scalpay which carries road and pedestrian traffic together with the water supply for the island.

In December 1997, Scalpay's oldest resident, Mrs Kirsty Morrison (103), led the way for the first drive across the bridge. The dream had become a reality as the islands were finally linked. 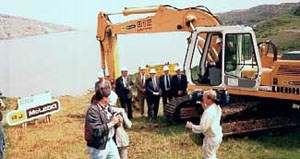 Work on the Scalpay Bridge project began in 1986 - only three years after the completion of the South Ford Causeway from Benbecula to South Uist. The first step was a study on into providing a fixed link across the Sound of Scalpay. The deep water channel and the needs of seagoing vessels ruled out consideration of a causeway.

In July 1993 Crouch Hogg Waterman were appointed as engineers to design and supervise construction. Consultation with local people and other groups followed - and in January 1995, assistance from the European Union Objective One programme was approved. In July the same year, R.J. Macleod (Contractors Ltd.) Ltd were awarded the contract for the advanced earthworks - and work formally began on July 27. 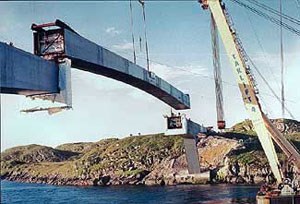 Swinging in the last section

In April 1996, Edmund Nuttall Ltd were awarded the contract for construction of the main bridge. Rock for the embankments was taken from sections of hill along the Kyles Scalpay to Tarbert road to help with future road improvements. The main span of the bridge is 170 metres long - and the whole box girder structure, made in the Netherlands, was prefabricated off-site, first into 24 boxes and then into three segments.

The two legs and the initial spans on each side of the bridge were lowered into place to fit on to a range of massive pins embedded in the concrete of the abutments. A vast water-borne crane, the Tak Lift 4, was used to do this. Then the main span was lowered into place in the centre.

UK Prime Minister Tony Blair found one of his slogans turned to a new use during the opening ceremony for the Scalpay Bridge. Councillor Donald M. Mackay, the then convener of Comhairle nan Eilean Siar (the local council for the Western Isles) laid out local aims in a familiar style. 'Transportation, transportation, transportation' were the priorities of the council, he said, largely because of the poor legacy of infrastructure inherited when the council was founded in 1975.

'Today is a real red letter day for the people of Scalpay, the community in Harris and, indeed, the whole community of the Western Isles,' Convener Mackay said. It was also the first time a serving British Prime Minister had ever visited the Western Isles, he pointed out.

Convener Mackay also praised the support of the European Union, through the Highlands and Islands Objective One Partnership, for the scheme - without the £4.2 million from that fund, the £6.4 million bridge would have been beyond the reach of the Council. 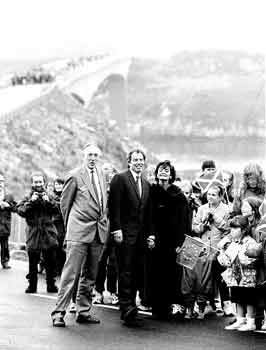 Picking up on Convener Mackay's 'transportation, transportation, transportation' echo of New Labour's education slogan, Mr Blair admitted that it might be appropriate for the Western Isles. 'The importance of a modern infrastructure could not be overstated,' he said. And it was vital that the young people of the Islands saw a future in their home areas. 'The bridge is a symbol of a future that is going to work, a future to which we are deeply committed' Mr Blair said.

Mr Blair and his family spent a weekend in the west of Lewis after the 1992 election defeat for Labour. Writing in the Stornoway Gazette in the week of the opening of the Scalpay Bridge, Mr Blair recalled how he, Cherie, Euan, Nicky and Kathyrn, visited the Uig area, playing on local beaches, and travelling by boat to some of the adjoining small islands.

During the summer of 1992 he was campaigning to win a place on the Labour Party's National Executive, and was meeting party members on the Western Isles. Mr Blair said he remembered the visit well because 'it was just weeks after our shattering 1992 election defeat. My spirits were low but were lifted by the sheer beauty of the islands.' he added.

He spoke also of his own commitment to providing equal opportunities and services for people wherever they lived. 'The practical value of the Scalpay Bridge is obvious and I very much hope it will play a major part in the revival of an island community which has such a rich tradition of fishing and seafaring.' Mr Blair said. 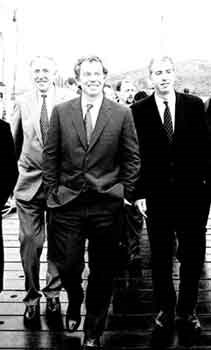 The opening of the bridge by Prime Minister Blair was used as an opportunity by councillors and others to press the case for further Government support for the last of three link-up projects proposed during the 1985-2000 period - the Eriskay Causeway. Asked about the Eriskay Causeway during his visit, Mr Blair said it would be rash of him to start making promises but this proposal would be kept in consideration and under review. 'We need to get the best infrastructure that is possible' he said.

Council officials said after the Scalpay Bridge opening that they were very pleased the scheme had been mentioned to and by Mr Blair - they pointed out that both the Scalpay Bridge and the Berneray Causeway, then under construction, had been authorised by the Tories, although opened under New Labour, and felt that this put the onus on Labour to back the final fixed link scheme. It was also becoming clear from experience at Berneray that the £10 million price tag attached to the Eriskay Causeway was much higher than likely reality - and that the causeway might only cost half that much.

Earlier Mr Blair, despite being delayed by poor weather conditions, insisted on meeting as many of the huge crowd which met him as possible, in the end waving his car away and walking the whole length of the bridge. The weather had brought mist and midges to the event - but overall good weather had aided progress with the project, the contractors said. With up to 30 people employed on the site during the scheme, everything had gone to plan, said Mr Nigel Bruce of Edmund Nuttall Ltd.

The first full-scale vehicle crossing of the Scalpay Bridge was on December 16, 1997 - almost nine months before the formal opening ceremony. The star of this local opening event was Scalpay's oldest resident, 103-year-old Mrs Kirsty Morrison. A vintage car, owned and driven by the former chief of the Harris Hotel, Tarbert, Mr John Murdo Morrison, first crossed to the island by the last ferry service before picking up Mrs Morrison and leading a cavalcade across the bridge from Harris.

The convoy included vehicles from the many services which were now getting direct access for the first time, such as buses, police, ambulance, gritting and refuse collection vehicles, and a fuel supply firm. The chairman of Scalpay Community Association, Mr Alasdair Macleod, said that while Scalpay was now joined to Harris it was still an island and 'I will always say that I am a Scalpach as opposed to a Hearach.'

Comhairle nan Eilean Siar - or the Western Isles Islands Council as it was formally called at the time - was represented by transportation committee chairman Alex Macdonald. He said: 'It is not just a bridge - it is a bridge to economic prosperity for the island and I hope that will materialise.' 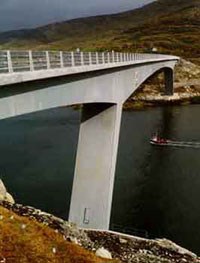 Building work began in 1999 on the Stolt Sea Farm plant in Scalpay - a spin-off from the huge investment in the Scalpay Bridge by Comhairle nan Eilean Siar and European funds as the project would never have been considered if the bridge had not been built.

The ultimate employment gain from the project was hoped to be up to 109 full-time equivalent jobs, so large a number for Harris that WIE - in conjunction with Stolt and Harris Development Ltd - surveyed the local population to assess whether there was an adequate supply of labour locally.

The factory scheme also won backing of almost £650,000 from WIE's Finance for Business budget - which incorporated training for the first 19 employees . Another £750,000 was spent on land renewal works. Yet despite the size of the sums involved, 80 per cent of the overall investment costs were met by the company.

Harris Development Ltd, Western Isles Enterprise and Stolt Sea Farm Ltd held a public presentation of the project in Tarbert Village Hall in July 2000 and the factory opened a few months later. It was part of a development package worth more than £5.7 million to expand Stolt's activities.