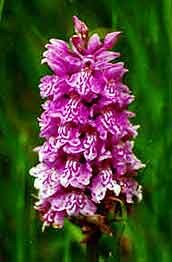 The flora of the Outer Hebrides is restricted by the geology, climate and geographic position. Geologically, almost completely composed of impermeable Lewisian gneiss, the Islands support only those acid loving plants that can cope with an oceanic climate and exposure to wet and salty gales. Where westerly winds have blown shell sand over peat a greatly enriched flora exists, the resultant habitat is Machair.

One of the botanical wonders of the Islands is the golden spread of primroses by the airfield on Barra. Elsewhere the Machair is noted for vast numbers of orchids and associated vegetation. Three heathers; ling, bell heather and cross-leaved heather, dominate the Moorland vegetation which holds large numbers of insectivorous plants such as sundews.

Formerly covered by discontinuous scrub woodland, the Islands are now devoid of natural woods except for small pockets on inland cliffs and on freshwater islets, secure from fire and sheep. In recent years, Forestry Commission plantations of Sitka spruce and Lodgepole pine were planted in Lewis, as well as a number of shelter belts. Unfortunately, most of the pines were destroyed in 1992 by moth infestation. The most important mixed wood is that planted around Lews Castle at Stornoway, dating from the mid 19th century.

A large part of the Outer Hebrides is covered by water and bog and both sustain important communities of peat and wetland vegetation.

There are only two native land mammals in the Outer Hebrides, Red Deer and Otter. It was man who introduced the rabbit, blue hare, hedgehog, brown and black rat, feral cat and polecat. The origin of mice and voles is uncertain. The only reptile is the Slow-worm, a legless lizard. No native amphibians are known and any frogs, newts or toads found on the Islands will have been introduced. Pipistrelle Bats occur in and around Stornoway.

Marine mammals include the grey and common seal which breed on offshore islands, and many species of whale, dolphin and porpoise. Occasional turtles, mainly loggerhead and leathery, may be met in coastal waters.

Three hundred and twenty seven species of birds have been recorded in the Outer Hebrides and more than 100 breed. The Islands provide a natural flyway for migrating land birds to and from their Arctic breeding grounds and a refuge for windblown vagrants from America and northern Europe. Many species of bird breed in the Outer Hebrides and the surrounding islands. This includes, most of Britain's corncrake population, which breed on the croftlands of the islands. Golden Eagles inhabit the uplands of Lewis, Harris and North and South Uist. A few pairs of Peregrine Falcons survive on coastal cliffs and Merlin and Buzzard are not uncommon anywhere on hill and moor. Owing to the absence of voles and other suitable prey in sufficient quantity in Lewis and Harris, Hen Harriers, Long and Short-eared Owls and Kestrels are confined to the southern isles.

Red-throated divers nest on countless small tarns and a few black-throated divers on bigger lochs, mainly in Lewis. Arctic Skuas are spreading south from Lewis as far as South Uist but the great skua is still found breeding only in Lewis, St Kilda, North Rona, the Shiant Isles and Barra Head. An important feature of the winter bird life is the great diversity of wildfowl found on the Islands. Varieties of duck, such as eider and long-tailed are found in the shallow water around Lewis. The Uists and Benbecula are noted for their breeding Mute Swan and Greylag Geese as well as Whooper Swans and white-fronted geese and duck.